Are You Ready for Residency Interview Season?

Are You for Residency Interview Season?

RezRATE was created because we understand how exhausting residency candidate selection can be. Every year you have to screen applicants, send out invitations, coordinate schedules, compile informational packets, complete evaluations, organize feedback, prepare for and conduct meetings, and debate rankings. Making a good match takes time, but it’s worth the effort because each resident represents a huge investment your program is making in its future.

The annual estimated cost associated with training and supporting a single resident can range from $180,000* to $224,668**. Multiply that cost by each residency year and then multiply that total again by the number of residents you plan to support. The final sum might seem staggering, but it’s not unreasonable given all the ways residents contribute to a program’s overall success and reputation.

Because the stakes are high and candidate selection is so critical, you might be asking yourself:

The answer to all these questions is RezRATE, a suite of tools developed to help graduate medical educators make better decisions about residency candidate evaluation. RezRATE consolidates all your information into one place and simplifies every step of the process, from the invitations to the final rank list.

“I have been a coordinator in Neurosurgery for 11 years now and was dreading another interview season, until today… Oh my goodness! This is SOOOO great. I just ran across the printing of everything – candidate schedules, candidate name tags, faculty schedules!!!! Everything that takes so much time to do manually is all right there for you at a click of a button! And it all looks so professional! You will be a godsend for every coordinator across the country!!! It’s the one program that really is developed for the coordinator!”

“When I started to assist my department with recruitment, I was a senior administrative assistant with no previous experience or knowledge about what the process even entailed. Thanks to RezRATE, I was able to sail through my first recruitment season without any trouble. I can’t begin to describe how simple RezRATE was to use and how responsive Mike and Carl were to my questions. Their software made it so easy for our team to view and edit candidate information. Everything we needed was located in one central place. Having that stress-free experience was one of the factors that encouraged me to pursue my interest in this field. I recently completed my second interview season using RezRATE. This time, however, I was a full-fledged program coordinator! RezRATE takes all the time and worry out of a recruitment season. I wouldn’t want to do this job without it. I fully recommend this program.”

Let us show you how RezRATE can get your team ready! 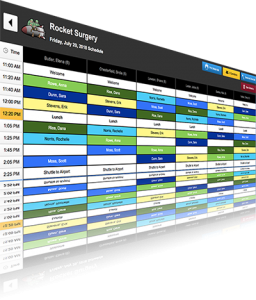 Managing everyone’s needs can sometimes feel like an impossible task. That’s why RezRATE provides administrators with the tools they need to make the candidate interview process simple and successful.

With RezRATE, users can:

No more digging through stacks of paper or struggling to consolidate feedback! RezRate has several features specifically designed to make your evaluators’ work quicker and more efficient: 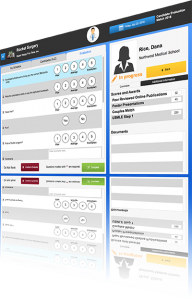 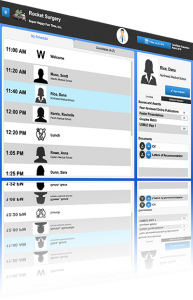 Picture it! Interview season is over and you’ve finally finished processing your candidates. You’ve chosen the best of the bunch, but one more step remains before a great match can be made. All those fantastic, top-tier candidates you carefully selected after hours of rigorous ranking? They still have to rank you too.

You only get one chance at a first impression, but don’t worry! RezRATE can help you make it the best one possible.

RezRATE enhances your program’s image by making sure your interview process is:

Candidates get their own personalized schedules with real time updates, which minimizes the opportunity for confusion and miscommunication. With RezRATE, last-minute changes don’t create last-minute headaches.

Come interview day, you can greet your candidates with customized badges instead of hastily handwritten name tags. Make the interview process polished and personal to leave a lasting favorable impression.

Ready to see RezRATE in action?